A plug-in oscilloscope is electrically like any other oscilloscope. The mechanical housing of the plug-in instrument is different from that of the compact one, because the former consists of a mainframe to which one or more plug-in units can be added, to vary the oscilloscope’s facilities. The company which has elaborated the plug-in idea the most by far is Tektronix, Inc. The picture below shows an example demonstrating the idea. The choice between a plug-in or a compact oscilloscope can be aggravated by the question: How many different oscilloscope functions do I need, and for how many people? 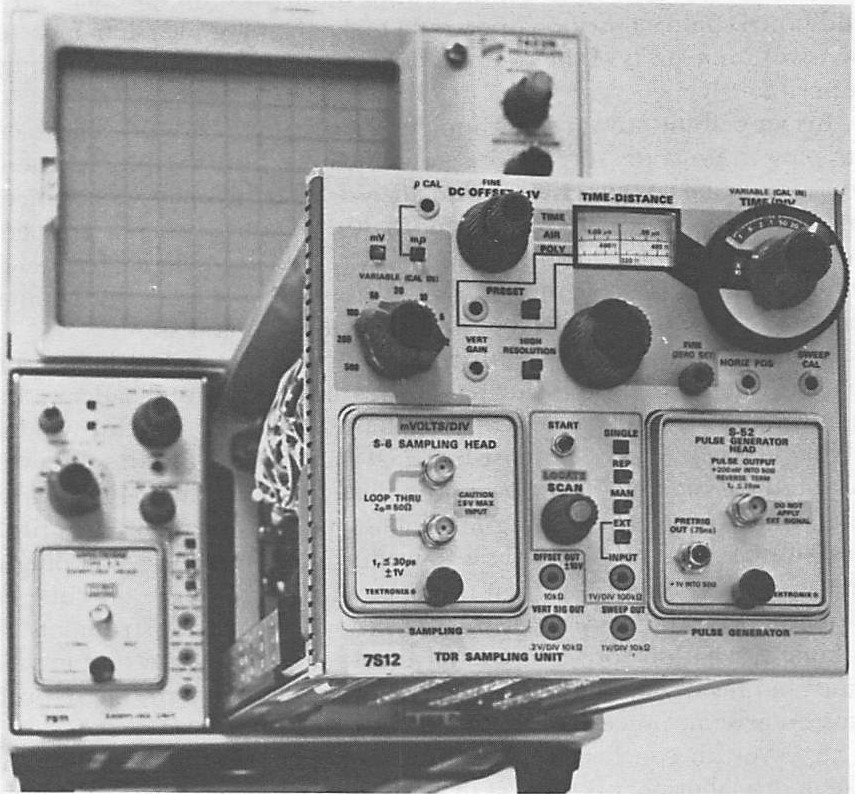 If someone must equip a small laboratory staff (about 4 to 6 engineers) which must fulfill a great variety of R&D jobs, the preference will be for plug-in oscilloscopes. Now, everyone can have a mainframe with his or her own standard plug-ins. However, for the laboratory, several different special functions can be bought as plug-in units, which are cheaper per item than a complete oscilloscope. If, on the other hand, a classroom must be equipped with many of the same oscilloscopes (that is, functions), the compact oscilloscope is the one and only choice, because for the same function a compact is cheaper than the mechanically more complicated plug-in instrument.

Because of the advanced technology in electronics, it is possible to create plug-in units for several kinds of functions, for example, frequency counter, digital voltmeter, spectrum analyzer, time-domain reflectometer, and lately, the logic analyzer. Of course, these all are emi­nent developments, but there is a catch. The specs of the frequency­ counter plug-in unit can only compete with those of a moderate compact counter. The same applies to the DVM function and so on.

It makes sense, then, to set up a plug-in system in a lab if one realizes what he or she is buying. Don’t think that it is cheaper to buy only the plug-in units as an extra to the oscilloscope, thereby avoiding having to buy the more expensive special instruments. Besides this, what do you do if you need three or more similar functions in one measuring setup and have only one plug-in oscilloscope? To overcome this problem, special power-supply units are produced into which several plug-in units can be inserted. But then this combination cannot really compete anymore with the price-performance ratio of compact instruments.

Finally, what do you do if you have your special plug-in unit in your hands but need a second main frame which is not at hand? These prob­lems do arise in practice.

However, in conclusion, a very strong point pleading for a plug-in system in a laboratory is the fact that all equipment comes from the same supplier. So only one salesperson serves you and the after-sales service will be much better than when many instruments are bought from many different suppliers. Your lab has now become a good customer of that one supplier, and usually, in such cases, the service will be much quicker and smoother. Now, without calculating and expressing the profits thereof directly in money, it can be stated that good service saves a lot of time and thus a lot of money.